This is the story of the LPEpower mustang test car that is used to put our engines through their paces and provide a lot of fun while doing so. It is also an excercise in cutting edge lego engineering, where lego bricks have to cope with a lot of stress that they were not designed to take.

It all began in 2004 when i wanted to make another big car. This time better than my previous attempts. Something modern that would be able to test the pneumatic engines that i was building. So in early 2005 the first version of the Mustang was completed. 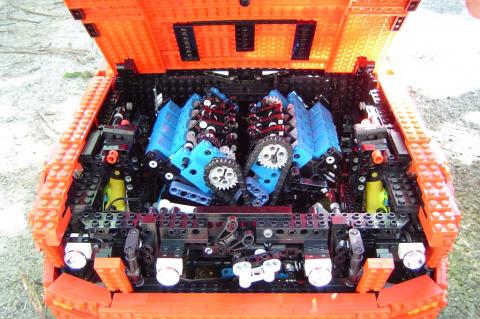 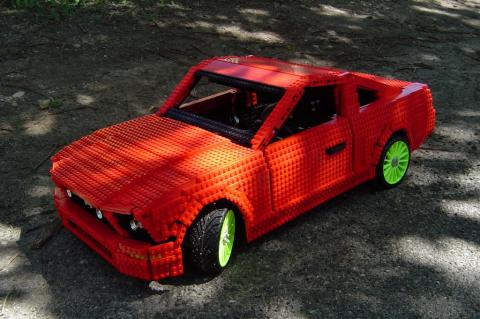 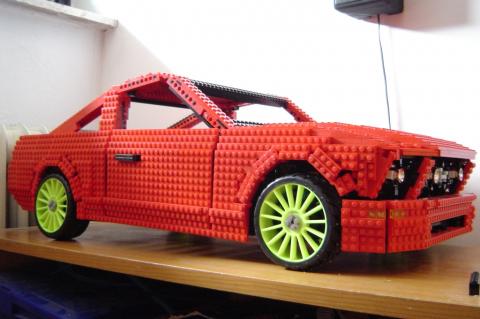 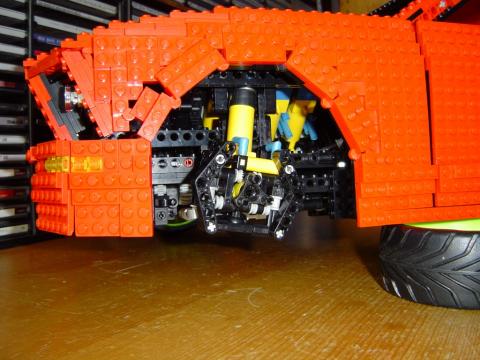 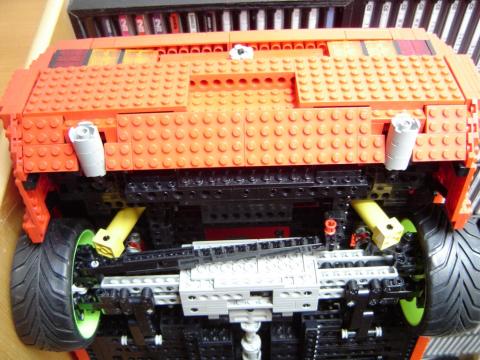 It featured a realistic suspension like in the real car, macpherson struts in front and a rear live axle, it had a slightly improved version of the engine i used in my previous model, a dodge charger, and it had new non-lego wheels. At this stage it used modified 8466 wheel hubs, which were glued onto liftarms, to enable me to create macpherson struts.

The car had a bunch of problems, the main was weight. It weighed something like 6 kilograms, which prooved to be quite a challenge for the fragile lego mechanics that i first installed into it.

The engine was also not suited to the job at all. As it was a pre-LPEpower design, it had no ballance shaft which would have prevented the crankshaft from twisting, and it still used the soft lego rubber hoses, which frequently popped off. 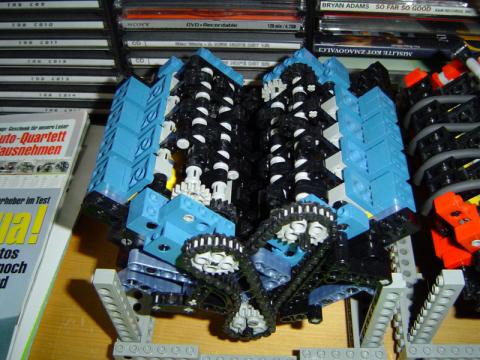 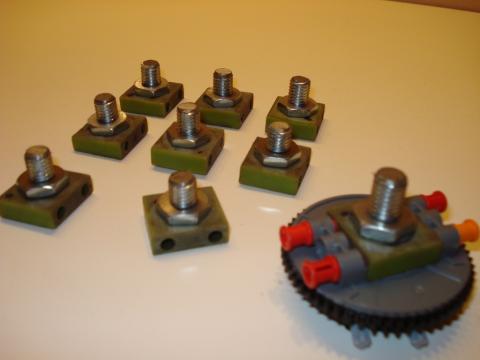 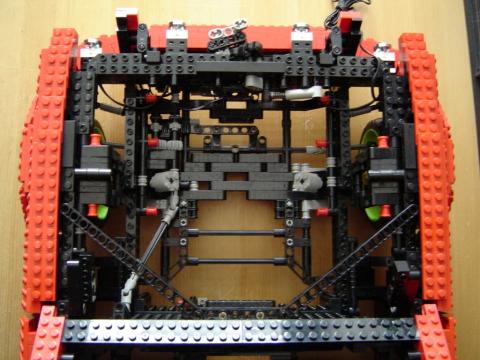 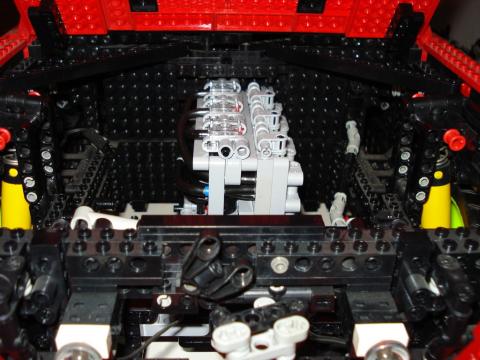 The first version of the car had a live axle, but i quickly switched to an independent double wishbone setup, so that i could have a driveshaft and differential that were able to cope with the stress.

Then in 2008 the first LPEpower engine, the sys inline 3 was installed into the Mustang. That proved a total disaster for the diferential, which quickly flew apart.

After a lot of trial and error a sturdy differential was built, that could withstand the power of the inline 3, which powered the 6kg behemoth around my yard and even provided some wheelspin on snow. At this stage the wheel hubs were upgraded from 8466 hubs to large turntable bearings with custom non lego 17hex hubs that now allowed for the correct mounting of the 1:8 r/c wheels.

The differential later had to be strenghtened when the LPEpower V8 made its debut in the car.

Meanwhile, while driving it i have converted the car to have remote controlled steering. At first i used the lego power functions Infra red controller. But that turned out to be a disaster as soon as sunlight was involved (even indoors). There were many crashes. After that i switched to steering that is controlled via cable by electric motors.

In 2009 i was bothered by the awkward proportions of the car, because it was too wide. So i decided to remove 4 studs of width in the middle. At the same time i performed some much needed upgrades to the body and suspension. The front was also redesigned to more closely resemble the 2009 facelift of the real car. 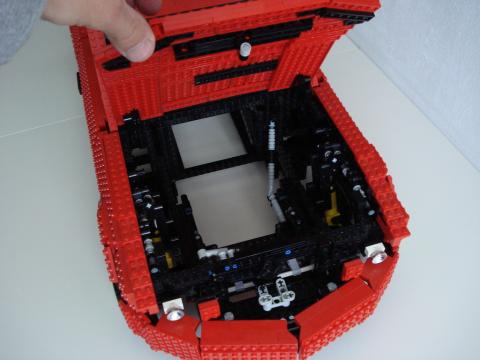 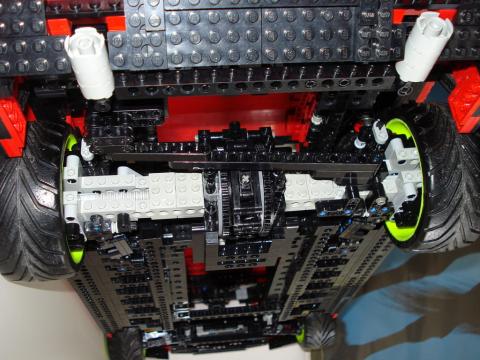 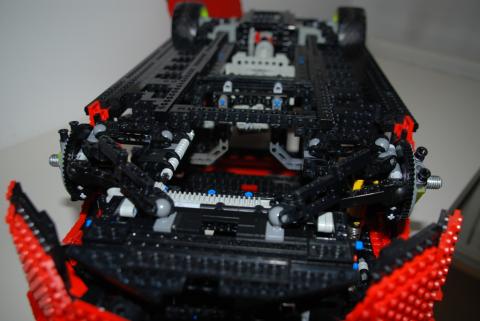 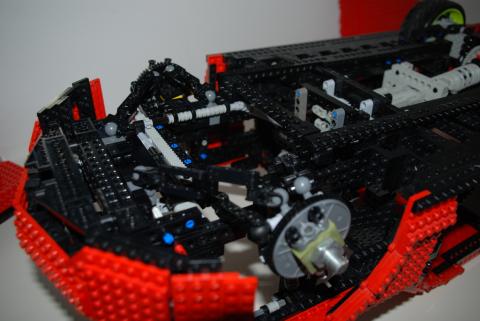 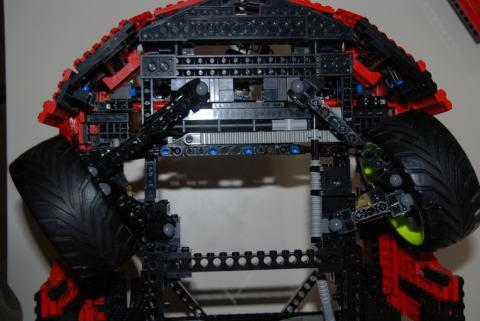 Since the it was now narrower, it was easier to make a sturdy live axle with a big turntable diferential. The front suspension was now a multilink macpherson setup with redesigned strut towers, so that the LPEpower V8 was able to fit into the much narrower engine bay.

In 2011 the Mustang received a total rebuild. I changed every bit of the car, to make it stronger and lighter. Which ment that with the V8 engine mounted it now weighed only 4.5 kilograms (2kgs less than the original from 2005). The front suspension was changed again to wishbones. 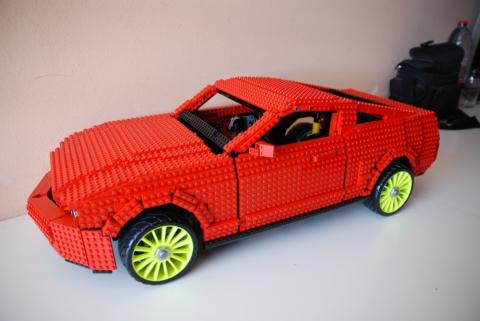 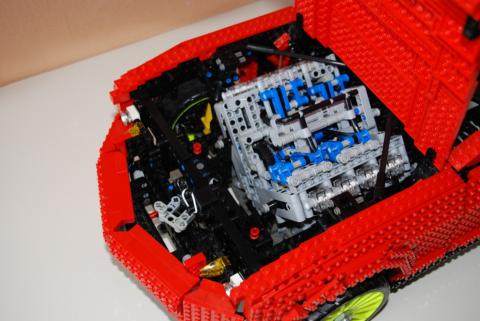 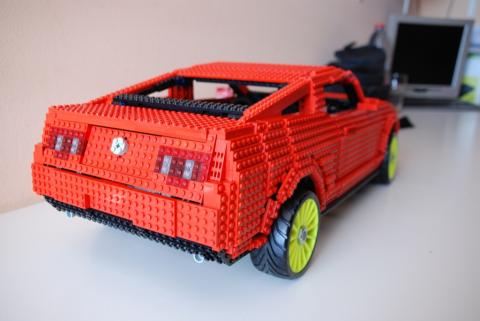 This is also where the first and only Mustang was sold to a customer from germany, who personally picked it up. 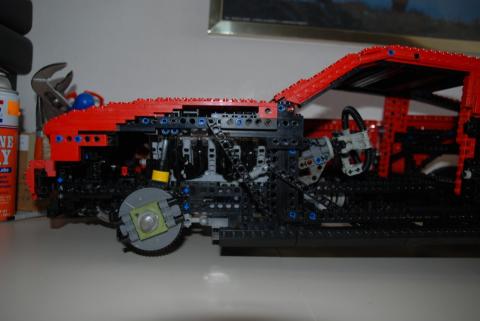 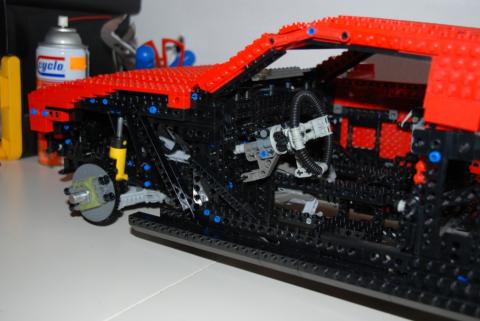 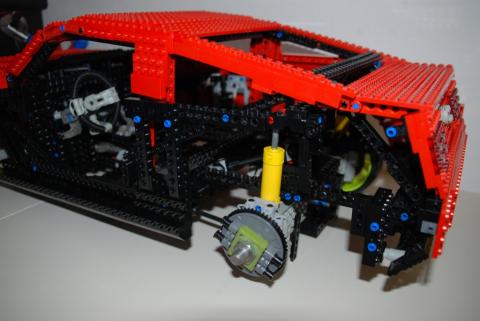 The final outing for the current car was in 2013, where its v6 defiant engine made it do burnouts and spinning its wheels. At this stage it was clear, that the car needs to go on a radical diet.

So, the mustang is now again due for a big rebuild. Expirience suggests, that the plate bodywork must finally give way to panels and as much studless as possible, to get rid of weight and increase strength.

You can now buy building instructions for the current version in the store :)